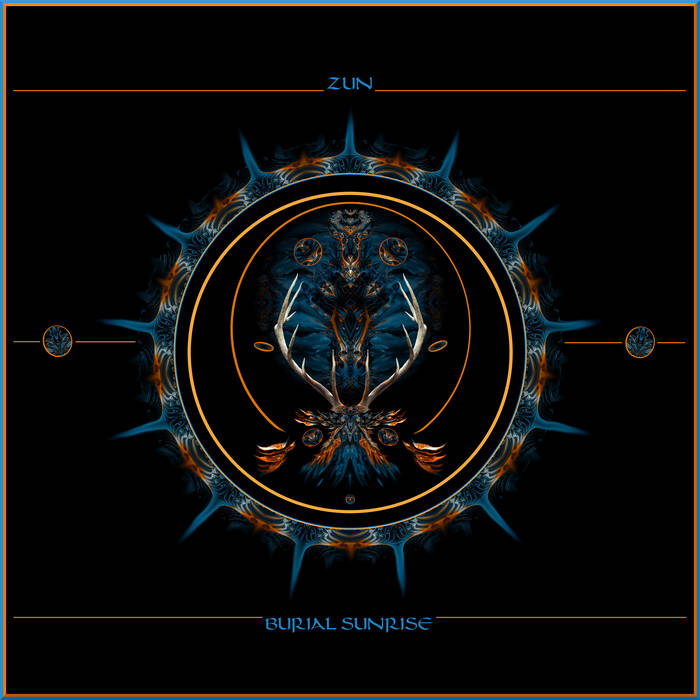 For the desert rock converted, ZUN’s Burial Sunrise is nothing short of bliss. To those for whom the names Gary Arce, John Garcia, Sera Timms, Mario Lalli, Harper Hug, Robby Krieger and Bill Stinson resonate, the project’s debut release should be a landmark of the genre. Not just because it brings together powerhouse forces like the tone of Arce‘s guitar, as heard in desert progenitors Yawning Man as well as The Sort Of Quartet, Ten East, Dark Tooth Encounter, Yawning Sons and so on, and the voices of Garcia (Kyuss, Vista Chino, Hermano, Unida, Slo Burn) and Timms (Ides Of Gemini, Black Mare, Black Math Horseman), but because of the ultra-fluid but still cohesive vibe it manages to create across its six-track/thirty-seven-minute span, rich in atmosphere even as it alternates vocalists, swaps drummers between Hug (who also plays synth and recorded the album at Thunder Underground in Palm Springs, California) and Stinson (also of Yawning Man), brings in Lalli for bass on one cut, sees Krieger (guitarist for The Doors) sit in on electric sitar, and features deft turns of mood and sensibility.” Added Spin specifically of the band’s “All For Nothing” single, “The universe of rock ‘n roll heavyweights adjacent to Queens Of The Stone Age and Kyuss sprawls far, wide, and extremely heavy. ZUN, the latest project of desert rock pioneer Gary Arce, features the latter’s John Garcia and doom-and-gloom mistress Sera Timms of Ides Of Gemini… Forget ayahuasca — the album’s third listen, ‘All For Nothing,’ conjures true California mysticism in its swirling Santa Ana winds of guitars, tribalistic drum rolls, and Garcia’s melancholic, effects-fuzzed taunts.”

As the six-stringer for Yawning Man going back three decades, Gary Arce is one of the principal architects of the sound born in California’s sands and known commonly as desert rock. His contributions have been pivotal in the creation of a style no less American than Delta Blues and no less imitated worldwide, and with ZUN’s Burial Sunrise, he not only reaffirms the breadth and vitality that has made his work so essential, but builds on it in expansive and vibrant ways.

Arce plays bass and lap steel as well, and he and Garcia and Timms are joined by drummers Bill Stinson (Chuck Dukowski, Yawning Man) and Harper Hug – the latter of whom also recorded the album at Thunder Underground Studios in Palm Springs, California. Mario Lalli (Fatso Jetson, Yawning Man) also contributes bass on a track, adding to the fluid, jammy feel that pervades the vast soundscapes conjured.
Timms and Garcia divide lead-singer duties among Burial Sunrise’s six cuts, with Garcia lending his signature croon to “All That You Say I Am,” the brooding “All for Nothing,” and the drifting desert ode “Nothing Farther,” while Timms brings her ethereal, otherworldly presence to “Solar Days,” “Come Through The Water” and “Into The Wasteland,” the last of which might just be the album’s signature piece, seeming to mirror the wide-ranging, sandy thematic of “Nothing Farther” in bringing the desert – a place too often wrongly thought of as dead – to life in vivid colors and warm tonality, but pushing even further into an uncharted reach.

Known for forming and contributing to projects like Ten East (with Brant Bjork), Dark Tooth Encounter (with Lalli, Stinson and Scott Reeder), The Sort of Quartet, Yawning Sons (with Sons Of Alpha Centauri), and more, Arce brings a style that is inseparable from desert rock. For the partnerships he’s made in ZUN and for the scope of the album, its laid-back feel and pervasive exploratory sensibility, Burial Sunrise might just prove to be a landmark in his discography as well as the beginning of a new era of his work, continuing to reshape the genre he helped create in the first place in a manner that, like the sands themselves, seems to remain separate from time despite the chaos all around.

All music written/composed by Gary Arce

"Come Through The Water"
www.youtube.com/watch?v=k61smSqdNFA

Bio by JJ Koczan
We wish to give BIG thanks to JJ for writing our bio, for his rave review of our record, and for his helping our music reach as many people as possible. We love him, and vastly appreciate his never ending efforts to support bands and musicians like us.
Please, refer to the link below to dig more excellent music:
theobelisk.net/obelisk/

Most of all...we thank all of YOU! We truly, deeply appreciate the support you have given us of our music, of our lifesblood...which we did put into this music. We would not have, could not have been able to do it without you. XO

Bandcamp Daily  your guide to the world of Bandcamp